Ruling In Favor Of NSA's Program Relied On Claims In 9/11 Report That Aren't Actually In That Report
Traffic Safety Administration Takes Its Blood And Saliva 'Survey' To Pennsylvania, With Predictable Results

The Greatest Response To A Cease And Desist Letter, Probably Written While Drunk

Too Much Free Time

It’s been a while since we wrote about one of these treasures, so we figured we’d close the year out with a bang. We discovered yet another amazing response to a cease and desist letter, and this one may be the greatest of them all — if only because we think its author might have been drunk while writing it….

Jeff Britton, the owner of Exit 6 Pub and Brewery in Cotteville, Missouri, received a cease and desist letter from none other than Starbucks, specifically from Anessa Owen Kramer of Honigman Miller Schwartz and Cohn, over a beer named “Frappicino.” As the world knows, the lords of coffee sell a frozen drink (a coffee Slurpee?) by the name of “Frappuccino.” Yes, the names are similar, but to be confused enough to think you could order the nectar of mall-hopping teenage girls at a bar, you’d have to be pretty drunk.

Rather than cower in fear over the legal consequences threatened by America’s coffee monarch, Britton decided it would be in his best interests to write a response on his own, without the assistance of legal counsel, because he didn’t need no stinkin’ lawyer. Here’s what he posted on the Exit 6 Facebook page:

So quick little story. Last week I received a cease and desist letter from the attorneys at Starbucks. Apparently there was a beer on Untappd that someone named “Frappicino”. 3 people had checked into said beer. 3. Starbucks [didn’t] like that. So I got a letter. They wanted me to remove the beer and promise never to use their names again. They also wanted my written response and guarantee. Here is their letter. And also my response.

Needless to say, Britton’s response is amazing — he even threw in some legalese, despite the fact that he’s not a lawyer (oh yeah, heretofore, baby). Here are some highlights from his letter (all errors included in the original). You’d have to be drunk to write something like this, right? Who cares, it’s freakin’ awesome:

Exit 6 has proudly sold at least 38 drinks in Cottleville MO and has a strong presence in St Charles county, a suburb 40 miles outside the St Louis metropolis. It has recently come to Exit 6 Pub and Brewerys attention that there were 3 check ins to the beer with a very similar name to the “F Word”. Unfortunately it was only similar to the F Word because we meant to call it the same thing. Lucky for us, we’re poor spelers.

I would like for both Ms Owen Kramer and Mr Bucks to rest assured we meant no deception, confusion, or mistaking in the naming of the beer F Word. We never thought that our beer drinking customers would have thought that the alcoholic beverage coming out of the tap would have actually been coffee from one of the many, many, many stores located a few blocks away. I guess that with there being a Starbucks on every corner of every block in every city that some people may think they could get a Starbucks at a local bar. So that was our mistake.

Mr. Bucks isn’t Ms. Owen Kramer’s co-counsel; no, this “poor speler” is addressing Mr. Star Bucks himself, as if he were an actual human being. We imagine Britton was at least six Frapps in at this point.

We haven’t even gotten to the best part yet. To show Mr. Bucks just how sorry he really was, Britton enclosed a check in the amount of Exit 6′s profits made from its “Frappicino” beer to be applied to Ms. Owen Kramer’s legal fees, which he admits were “probably … more than Exit 6 made last year.” Here it is:

Behold: the legal equivalent of a mic drop. Cheers to you, Jeff Britton! We raise a glass in your honor. 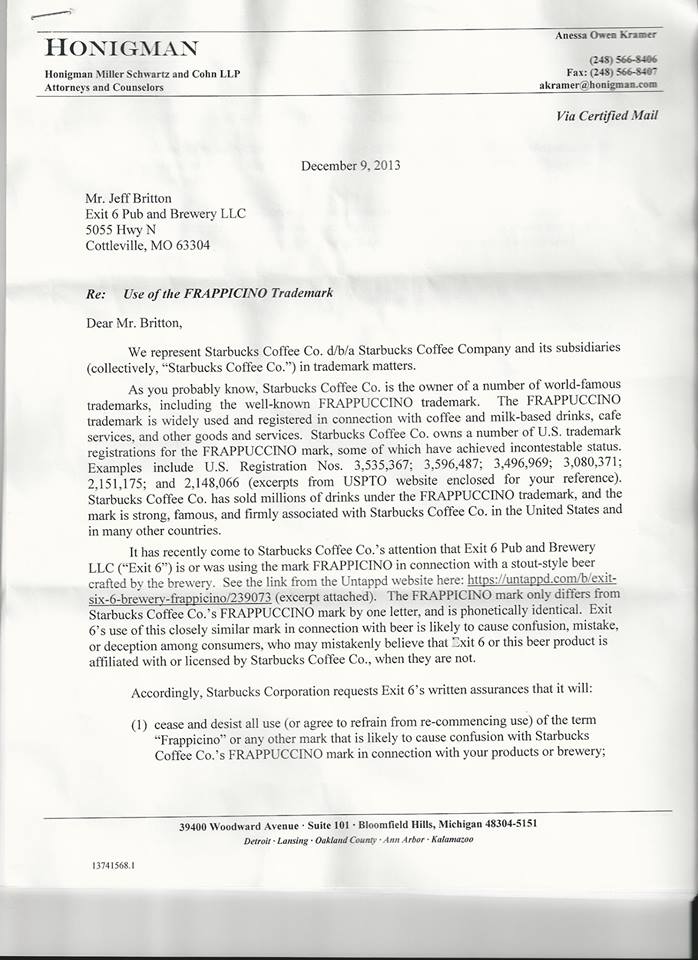 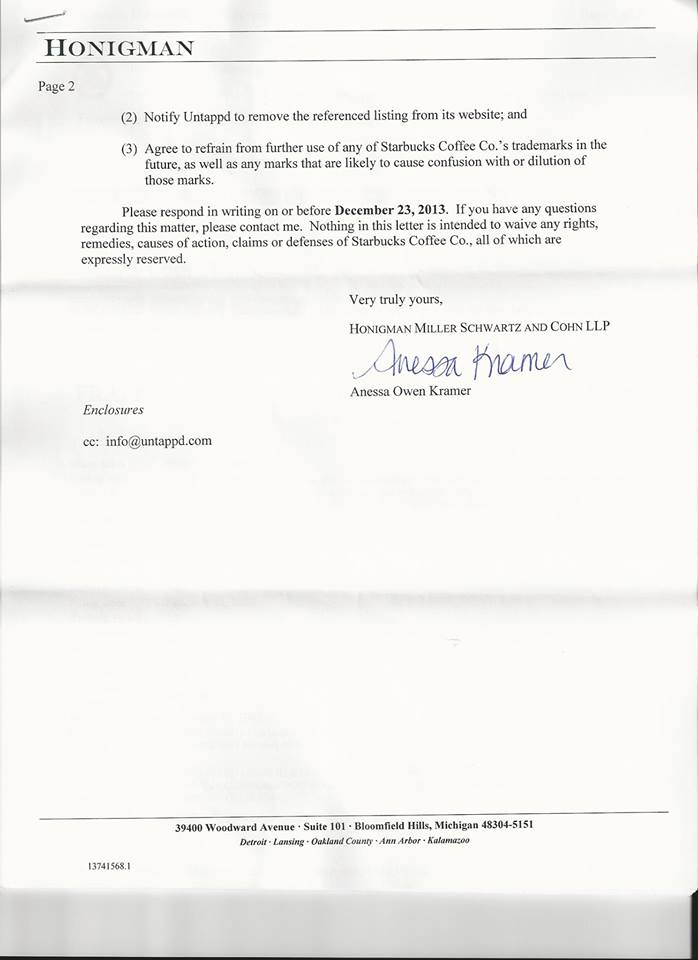 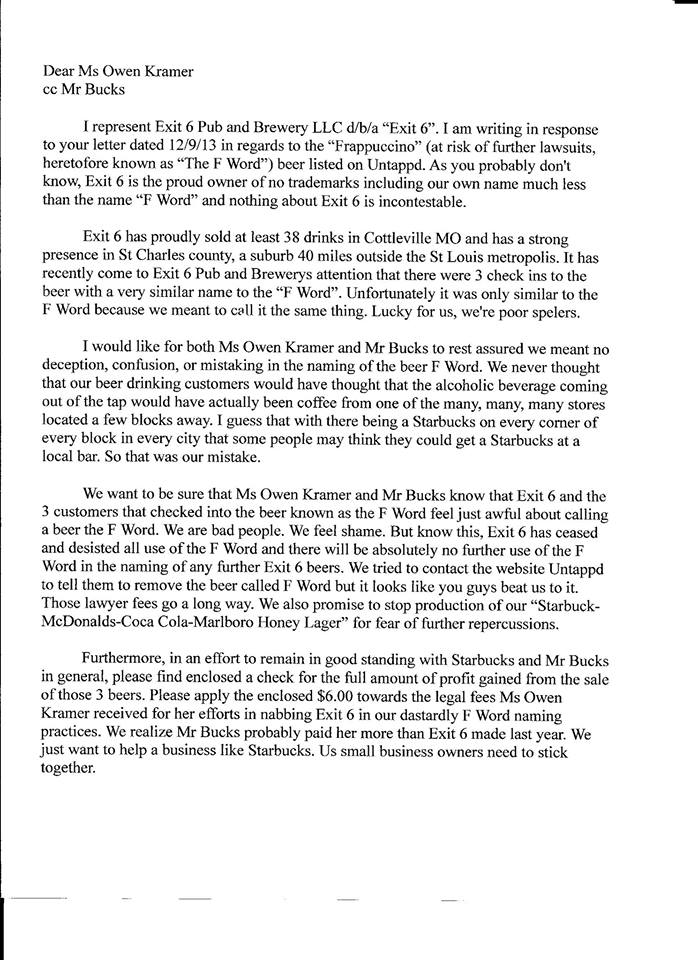 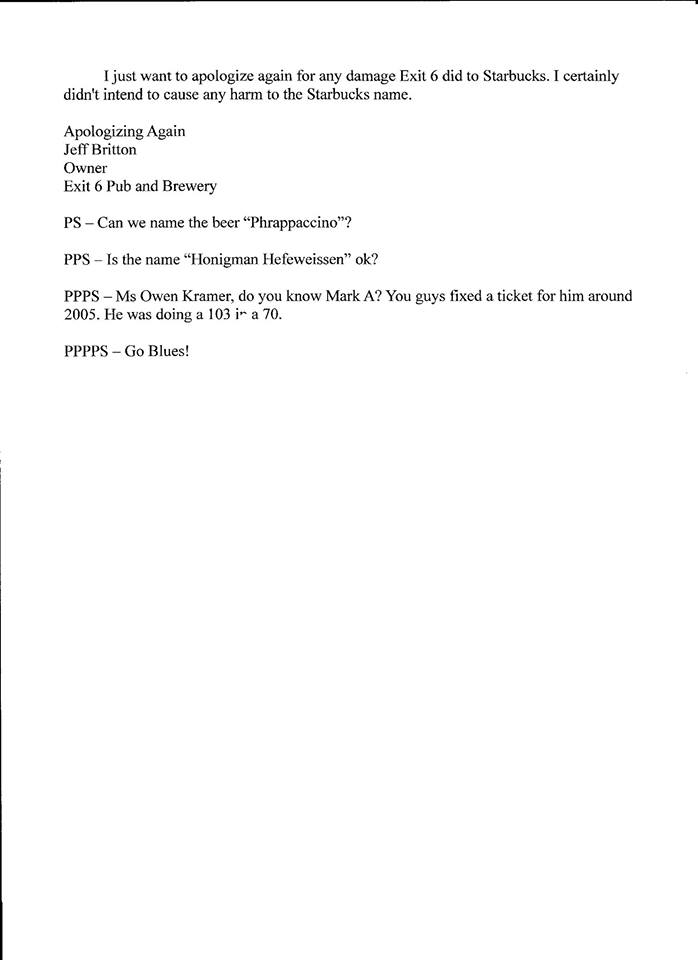 Comments on “The Greatest Response To A Cease And Desist Letter, Probably Written While Drunk”

As an avid San Jose Sharks fan and all things hockey, I approve of this C&D response!

Someone send this man a Starbucks gift card. He has earned it.

That’s cold ROFL I wouldn’t send a Starsucks card to my worst enemy.

Now that is how you respond to a legal threat letter. Very well done, Mr. Britton.

This is more creative than anything ootb has ever written, including his/her failed attempts at becoming some rich hollywood scribe.

i dont remember this happening, ever

drunk emailing….is there anything more fun? I think not….

The lawyer claims in his letter that the words “Frappuccino” and “Frappicino” differ by one letter and are phonetically identical.

Lawyers can’t count anything but fees or billable hours…

“99 percent of lawyers give the rest of us a bad name.”

I hope ButFuck’s lawyers continue to try and enforce this action for around 5 years charging ever increasingly exorbitant fees . . .

I didn’t realize Starbucks owned that word. I thought it was the generic term for “sh***y high-calorie milkshake that may contain coffee-like flavoring”.

I live in the area, and according to some friends who drink there they are selling T-shirts with the $6 check printed on them.

Here’s the contact info for the slut who issued the cease and desist letter. Spam her email and phone number please:

Slut? Really? What the hell does writing a C&D letter have to do do with her sex life?

Such misogyny burns you more than it does her.

That’s a little harsh, no? Calling someone a slut for doing their job makes you look stupid.

Exactly how does anything make her a slut?

And really, are sluts a bad thing in your mind?

The only thing he missed was calling it Monster Frappicino. Then I’d be impressed. Good going Starbucks. Perhaps you and Monster should hook up.

It was actually different by two letters as the bar was missing a C and changed the U to an I.

He should change the name to Crappuccino. It’s only off by one letter! Do you think they would get another cease and desist letter? The response to that could be hilarious.

But then he’ll just get sued by Fox (for the Beavis and Butthead reference).

Perhaps he should have sent them a big keg of “The F Word” to make up for it.

I wonder if they cashed the check?

Ruling In Favor Of NSA's Program Relied On Claims In 9/11 Report That Aren't Actually In That Report
Traffic Safety Administration Takes Its Blood And Saliva 'Survey' To Pennsylvania, With Predictable Results
Follow Techdirt