Monster Energy. The company’s name is enough to set the average Techdirt reader’s eyes rolling. The company that makes sugar-heavy energy drinks has become essentially a caricature of an overly aggressive trademark enforcer. This habit is somewhat surprising, given just how often the company loses lawsuits and oppositions, which one would think would be a deterrent for future behavior. Instead, it almost seems as though every loss only spurs Monster Energy on.

This continues on to today, when we learn that Monster Energy filed an opposition to a 21-year-old’s trademark application for his business, Monarch Energy. You’re probably thinking that the opposition is over the name of the young man’s company, which would itself be a stretch as trademark infringement. But, no, it’s over the kid’s proposed logo.

At age 16, Mason McGuire discovered arthritis in his lower back. The mountain biker, baseball player and motorcycle rider wanted to stay active without aggravating his newfound aches. One year older, the Forest Charter School graduate decided to start his own business to mitigate his problems, and hopefully ease those of others.

While taking a business course at Sierra College, the words of one individual continued to ring in his head: “My teacher kept saying, ‘You’ll never learn it until you do it,’” he said.

But on July 30, McGuire received a letter that stunted his company’s development. Monster Energy filed a notice of opposition against his company, Monarch Energy, for violating trademark rules. Specifically, it said McGuire’s logo was too similar to Monster’s.

Are the logos similar? No, they damn well are not. 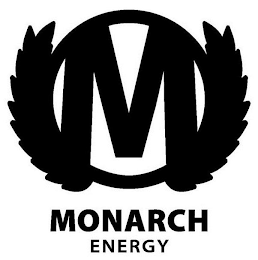 And, yet, this 21 year old has had to deal with this opposition before even getting his company truly off the ground.

Despite maintaining distinctions, McGuire said he was a bit nervous Monster Energy would file a claim against his company, because of Monster’s history of filing lawsuits, so he tried doing his due diligence before choosing the logo.

“I made sure to go over the rules many times that wouldn’t infringe with Monster,” he said. But, he later said he suspected the large energy company might intervene legally anyway.

McGuire acknowledges that there is no trademark police per se, meaning that Monster Energy must be aware of smaller businesses trying to exploit its brand. But, he added, the company can drop the court filing once it realizes an entrepreneur is not acting in bad faith.

“I don’t care too much that they’re going after me,” he said. But McGuire — who has yet to hire an attorney — said he could lose his business with the possible legal fees needed to combat Monster Energy. He also said he can’t afford a new trademark to change his logo, for which he’s already paid.

Monster Energy doesn’t have to care about the harm it’s doing, of course, but it certainly should. Especially when this is yet another example of an opposition that never needed to be filed. But because Monster Energy wants to play the bully, a young man that started a business might lose it.

Monster Energy: Do you have the energy to engage in legal thuggery?

Monster Energy: Want to be an ass but don’t have the energy? We can fix that.

Monster Energy: If we get people focused on our legal actions maybe they’ll forget the taste of the swill we sell.

I am so glad that I have never purchased a Monster energy drink.

I wonder how much of this sort of stuff is driven by corporate lawyers looking to generate billable hours vs executives trying to look like they’re doing something useful vs executives who are just clueless.

After digging into SEC filings for Monster I found that they had a 2.6 million slush fund for legal expenses, other than that it’s hard to find out how much money they spend on legal matters but given the insane profitability and huge stock buyback programs they are running, as well as the fact that distribution is now done by coke, Monster has very little to do as a firm but print money and market its drinks.

too bad there is no punishment for these bogus suits. if some group like the ACLU took up the cause (but they are too busy getting tranny bathroom rights as a thing)…..

Intake of High sugary beverages push the human pancreas to its limit for producing enough insulin to bring blood glucose levels down. Its just a matter of time before those monster lawyers, full of their own product, turn the lawsuits on themselves for the diabetes coming their way.

Autoshack rebranded as AutoZone because one word in the two-word name. If that’s the precident, then Monster wins, but only if they go after every other $blank Energy drink.

I thought you said he was being sued by Mobster Energy, because that probably wouldn’t end well. Good thing Mobster branched out into cables. Still, the guy could have been sued by the makers of Jurassic Park III.

Also, a good thing that ⲘⲪⲂⲊϮⲈ⳩ ⲈⲚⲈ⳩ϧⲨ aren’t suing over their choice of font.

You have a 35 month gap in comment history. Please explain.

The letter ‘M’ is the exclusive intellectual property of McDonald’s Corporation Inc. Both of the opposing parties should be arrested and i_prisoned for infringe_ent on this trade_arked letter.

Why is anyone still surprised by these actions? Monster is literally right in the name of the company!

Is there an address to which I can send a letter asking simply “What the hell is wrong with you?” ?

Lookup the names of the lawyers. Then figure out where they hold a bar card. Now read the ABA model rules and the rules for the State they are in.

Then bargrieve them. Bonus if you take the time to look up with the state insurance regulators for who sells lawyer malpractice insurance and then copy each insurance firm a copy of the grievance.

Yea, that IS a bit of work but hey – what price freedom?

An update: https://www.theunion.com/news/nevada-city-energy-supplement-business-returns-after-2019-logo-opposition-from-monster-energy/ — in short, he now has a completely new logo.